Summary
A mixin is a collection of methods that can be injected into a class. The mixin technique consists in building classes by composing reusable mixins. The advantages and disadvantages of the technique are very much debated. I will focus on the negative aspects.

The idea of creating classes by composing reusable collections of methods is quite old: for instance Flavors, and old Lisp dialect, featured mixins more that 25 years ago. Nevertheless, there are still people thinking that the idea is new and cool: as a consequence, we see a lot of new code where the idea is misused or abused. Writing a paper showing the downfalls of mixins is in my opinion worth the effort.

Injecting methods into a class namespace is a bad idea for a very simple reason: every time you use a mixin, you are actually polluting your class namespace and losing track of the origin of your methods. In this sense, using a mixin in a class is just as bad as using from module import * in a module. However, everybody agrees that it is much better to use the full form mymodule.myname instead of importing all the names in the global namespace, but nobody realizes that importing methods into a class via a mixin is potentially just as bad.

At worst, using mixins can become just a modern way of writing spaghetti code. In order to explain what the problem is, I will show two real life Python frameworks making use of mixins: Tkinter e Zope.

Tkinter is a GUI framework which is part of Python standard library. It is a case where mixins work decently well, because it is a small framework, but it is also large enough that it is possible to see the beginning of the problem.

Every Tkinter class, even the simple Label is composed by multiple mixins:

The standard library function inspect.getmro(cls) returns a tuple with the ancestors of cls, in the order specified by the Method Resolution Order (MRO). In our example the MRO of Label contains the geometry mixins (Grid, Pack and Place) and the generic mixin Misc which provides a lot of functionality by delegating to the underlying Tk library. The classes BaseWidget, Widget and Label have state and they take the role of base classes, not mixins.

You should see what I mean by namespace pollution: if you use any IDE with an autocompletion feature (or even ipython): if you try to complete the expression Tkinter.Label., you will get 181 choices. 181 attributes on a single class are a lot. If you invoke the builtin help

you will see the origin of the different attributes, i.e. the classes from which they come: the output spans a few hundreds of lines.

Luckily, Tkinter is a very stable framework (I mean: it works) and there is no need to investigate the hierarchies to find bugs or the reason for unexpected behavior. Moreover Tkinter is a comparatively small framework: 181 attributes are many, but not too many, and with some effort one could manage to find out their origin. Things are however very much different in the case of Zope/Plone.

For instance, have a look at the hierarchy of the Plone Site class which I report in appendix. Between square backets you can see the number of methods/attributes defined per class, except special attributes. The plot comes from a real Plone application I have in production. The total count is of 38 classes, 88 names overridden, 42 special names and 648 regular names: a monster.

To trace the origin of the methods and to keep in mind the hierarchy is practically impossibile. Moreover, both autocompletion and the builtin help facility become unusable, the self-generated class documentation become unreadable since too big.

In other words, a design based on mixins works for small frameworks, but it does not scale at all to large frameworks. Actually, Zope 3 has been entirely rewritten with the goal of avoiding the mixin abuse of Zope 2 and to use composition instead of inheritance (this is basically what the buzzwords Component Architecture really mean).

My hate for mixins comes from my experience with Zope/Plone. However the same abuses could be equally be done in other languages and object systems - with the notable exception of CLOS, where methods are defined outside classes and therefore the problem of class namespace pollution does not exist - in the presence of huge frameworks.

A consequence of namespace pollution is that it is very easy to have name clashes. Since there are hundreds of methods and it is impossible to know all of them, and since method overriding is silent, this is a real problem: the very first time I subclassed a Plone class I run into this issue: I overrode a pre-defined method inadvertently, by causing hard to investigate problems in an unrelated part of the code.

How to avoid accidental overriding

The first thing I did after being bitten by Plone was to write an utility function to identify the overridden methods. Let me show here a simplified version of that function, called warn_overriding.

You can use it when you need to work with a big framework which you do not know well.

First of all, it is convenient to introduce a couple of utility functions: getpublicnames to get the public names in a namespace

and find_common_names to extract the common names from a set of classes:

Moreover, it is convenient to define a warning class:

Now it is easy to implement warn_overriding as a class decorator.

Here is an example to show how it works in practice. Given the base classes

we can define the subclass

which features method overriding. The overriding is specified by the MRO, which includes five classes:

find_common_names takes those classes (except object which does not provide any public name) and look for common names which are printed by warn_overriding:

In recent versions of Python (2.6+) it is possible to use the elegant syntax

The advantages of the class decorator syntax are clear: the decorator is much more visible since it comes before the class and not after; moreover the warning prints the line number corresponding to the class definition, the right place where to look in case of overriding. It is possible to avoid the warnings by listing explicitly the overriding methods in the .override class attribute. For instance, try to add the line:

warn_overriding is a small tool which can help you when you are fighting with a big framework, but it is not a solution. The solution is not to use mixins in the first place. The next articles in this series will discuss a few alternatives.

Appendix: the hierarchy of Plone Site

Here is the picture: if it is too big to fit in your screen, that proves my point against mixins ;) 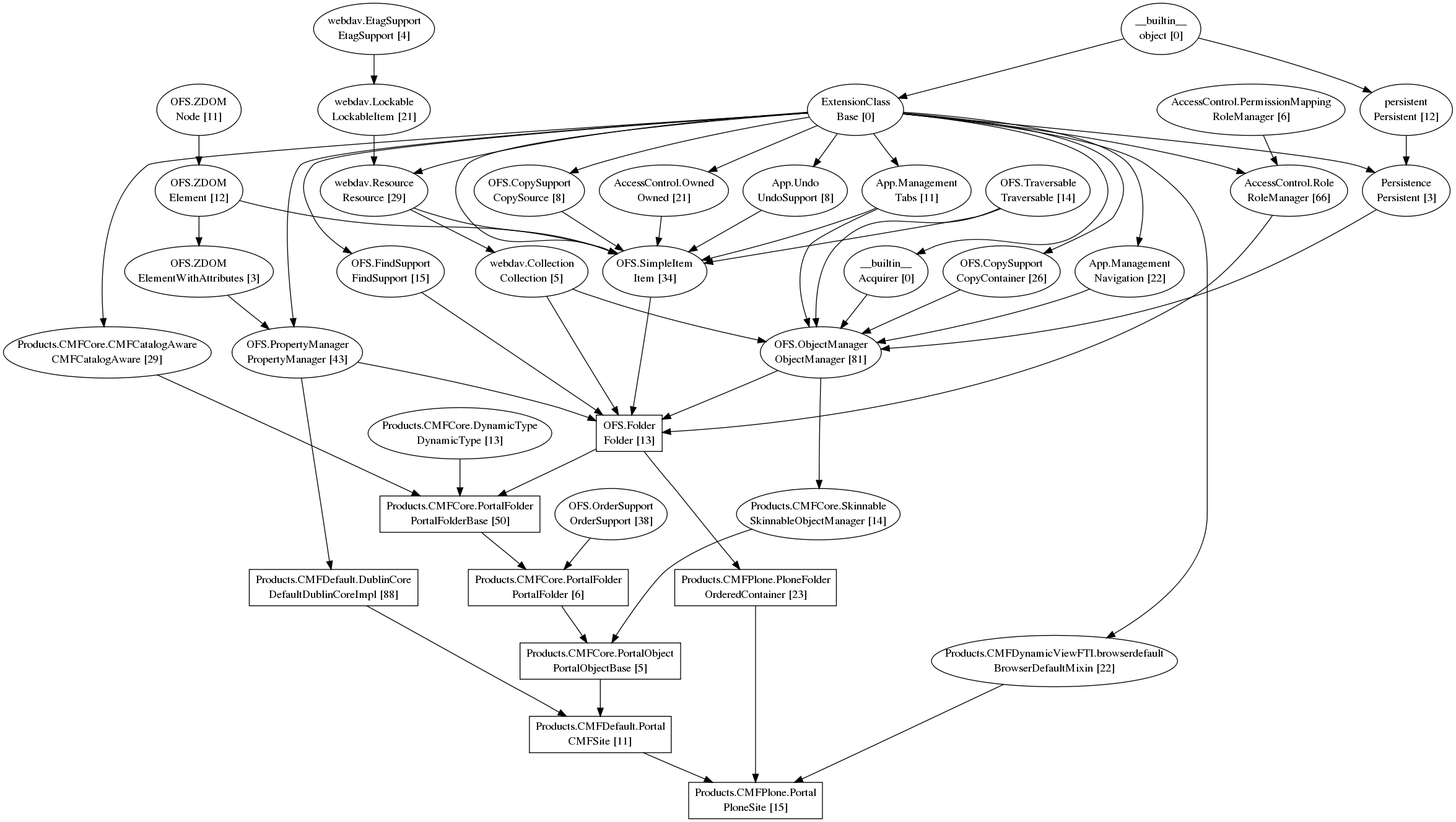 Have an opinion? Readers have already posted 12 comments about this weblog entry. Why not add yours?