"Pure Virtual Function Called": An Explanation
by Paul S. R. Chisholm
February 26, 2007
Summary
"Pure virtual function called" is the dying message of the occasional crashed C++ program. What does it mean? You can find a couple of simple, well-documented explanations out there that apply to problems easy to diagnose during postmortem debugging. There is also another rather subtle bug that generates the same message. If you have a mysterious crash associated with that message, it might well mean your program went indirect on a dangling pointer. This article covers all these explanations.

(If you know what pure virtual functions and abstract classes are, you can skip this section.)

(The comments before the destructors refer to Item 7 in the third edition of Scott Meyers's Effective C++: "Declare destructors virtual in polymorphic base classes." This code follows a convention used on several projects, where references like this are put in the code, serving as reminders to maintainers and reviewers. To some people, the point is obvious and the reminder is distracting; but one person's distraction is another person's helpful hint, and programmers in a hurry often forget what should be "obvious.")

In C++, a function's interface is specified by declaring the function. Member functions are declared in the class definition. A function's implementation is specified by defining the function. Derived classes can redefine a function, specifying an implementation particular to that derived class (and classes derived from it). When a virtual function is called, the implementation is chosen based not on the static type of the pointer or reference, but on the type of the object being pointed to, which can vary at run time:

Object Oriented C++: Under the Covers

(You can skip this section if you already know what a "vtbl" is.)

How does all this run time magic happen? The usual implementation is, every class with any virtual functions has an array of function pointers, called a "vtbl". Every instance of such as class has a pointer to its class's vtbl, as depicted below. 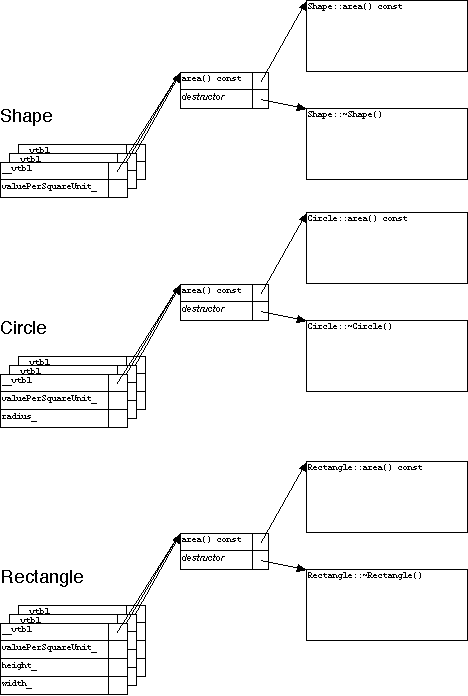 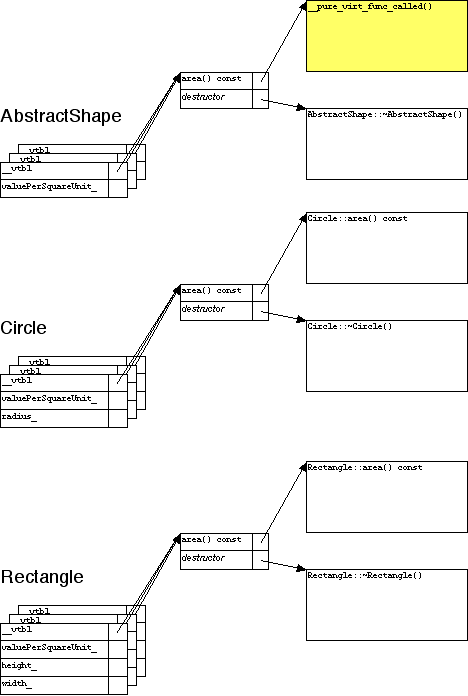 Figure 2. An abstract class's vtbl can have a pointer to a special function.

Build 'em Up, Tear 'em Down

When you construct an instance of a derived class, what happens, exactly? If the class has a vtbl, the process goes something like the following.

Step 1: Construct the top-level base part:.

Step 2: Destruct the base part(s) (recursively):

Two of the Classic Blunders

What if you try to call a virtual function from a base class constructor?

If the situation is a little more complicated, the error will be less obvious (and the compiler is less likely to help us):

Similarly, calling a virtual function indirectly from a base class destructor (sample program 4) results in the same kind of crash. The same goes for passing a partially-constructed (or partially-destructed) object to any function that invokes virtual functions.

These are the most commonly described root causes of the "Pure Virtual Function Called" message. They're straightforward to diagnose from postmortem debugging; the stack trace will point clearly to the problem.

There's at least one other problem that can lead to this message, which doesn't seem to be explicitly described anywhere in print or on the net. (There have been some discussions on the ACE mailing list that touch upon the problem but they don't go into detail.)

Let's consider these lines one at a time.

Something odd might happen to p1, so let's make a copy of it.

Note that the value of p1 might change after the call to delete. Compilers are allowed to "zero out" (i.e., render unusable) pointers after destructing their pointed-to data. Lucky (?) for us, we have another copy of the pointer, p2, which didn't change.

This is another classic blunder: going indirect on a "dangling" pointer. That's a pointer to an object that's been deleted, or memory that's been freed, or both. C++ programmers never write such code ... unless they're clueless (unlikely) or rushed (all too likely).

So now p2 points to an ex-object. What does that thing look like? According to the C++ standard, it's "undefined". That's a technical term that means, in theory, anything can happen: the program can crash, or keep running but generate garbage results, or send Bjarne Stroustrup e-mail saying how ugly you are and how funny your mother dresses you. You can't depend on anything; the behavior might vary from compiler to compiler, or machine to machine, or run to run. In practice, there are several common possibilities (which may or may not happen consistently):

The last is an interesting case. What was the object "exactly the way it was"? In this case, it was an instance of the abstract base class; certainly that's the way the vtbl was left. What happens if we try to call a pure virtual member function for such an object?

(Exercise for the reader: Imagine a function that, unwisely and unfortunately, returned a pointer or reference to a local variable. This is a different kind of dangling pointer. How could this also generate this message?)

Meanwhile, Back in the Real World

Nice theory. What happens in practice?

Consider five test programs, each with its own distinctive defect:

These were built and tested with several compilers (running on x86 Windows XP unless stated otherwise):

Some compilers recognized what was happening in the first two examples, with various results.

Visual C++ 8.0, Open Watcom C/C++ 1.4, and gcc 4.x recognize that a base class's constructor or destructor can't possibly invoke a derived class's member function. As a result, these compilers optimize away any runtime polymorphism, and treat the call as an invocation of the base class member function. If that member function is not defined, the program doesn't link. If the member function is defined, the program runs without problems. gcc 4.x produces a warning ("abstract virtual 'virtual double AbstractShape::area() const' called from constructor" for the first program, and similarly for the destructor for the second program). Visual C++ 8.0 built the programs without any complaint, even at the maximum warning level (/Wall); similarly for Open Watcom C/C++ 1.4.

The next two examples built without warning for all compilers. (That's to be expected; this is not the kind of problem normally caught by static analysis.) The resulting programs all crashed, with various error messages:

Invocation via a Dangling Pointer

The fifth example in the previous list always built without warning and crashed when run. Again, this is to be expected. For all compilers except Microsoft's, the error message was the same as for the third and fourth examples. Sun's compiler generated the same message, but Sun's debugger provided some additional information.

Microsoft Visual C++ 8.0 has a number of runtime libraries. Each handles this error in its own way.

When compiled with Sun Studio 11, and run in dbx with Run-Time Checking, the program died with an new error: "Read from unallocated (rua): Attempting to read 4 bytes at address 0x486a8 which is 48 bytes before heap block of size 40 bytes at 0x486d8". This is the debugger's way of saying, "You just used something in a block of memory, but this isn't a block of memory I think you should be using." Once the object was destructed and its memory deallocated, the program could no longer (legally) use that object, or that memory, again.

How can you avoid these kind of problems?

What about the "dangling pointer" problem in the fifth example? Programmers, in any language, need to design in terms of object ownership. Something (or some collection of things) owns an object. Ownership might be:

What kind of "thing" can own an object?

In our example, there was no clear ownership. Some function created an object, and pointed two pointers at it. Who owns the object? Probably the function, in which case, it should be responsible for avoiding the problem somehow. It could have used one "dumb" pointer (and explicitly zeroed it out after deletion) instead of two, or used some sort of smart pointers.

In real life, it's never that simple, except sometimes in retrospect. Objects can be passed from one module to one very different module, written by other person or another organization. Object ownership issues span equally long chasms.

Any time you pass an object around, you always need to know the answer to the ownership question. It's a simple issue, sometimes with a simple answer, but never a question that magically answers itself. There is no substitute for thought.

Thinking for yourself doesn't mean thinking by yourself, however; there is some good existing work that can help you. Tom Cargill wrote up a pattern language, "Localized Ownership," that describes strategies for these alternatives. Scott Meyers also addresses this in Item 13, "Use objects to manage resources," and Item 14, "Think carefully about copying behavior in resource-managing classes," in the third edition of Effective C++. See References for details.

Reference-counted smart pointers are very helpful in avoiding these kinds of problems. With smart pointers, ownership belongs to the set of smart pointers that point to the object. When the last such smart pointer stops pointing to that object, the object is deleted. That would certainly solve the problem we've seen here.

But that's another problem for another day.